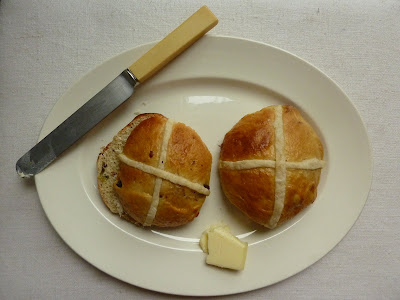 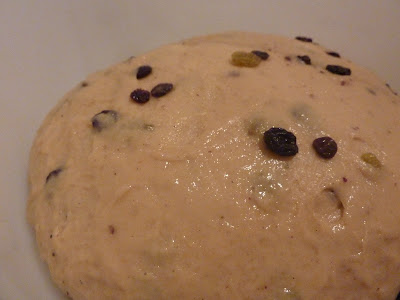 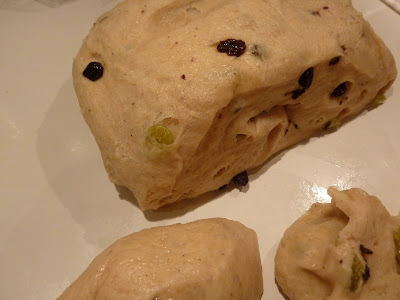 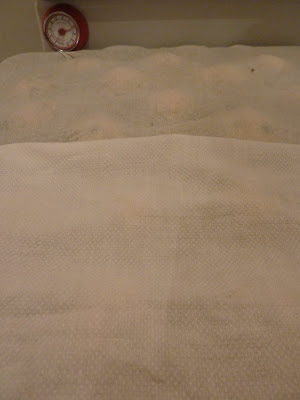 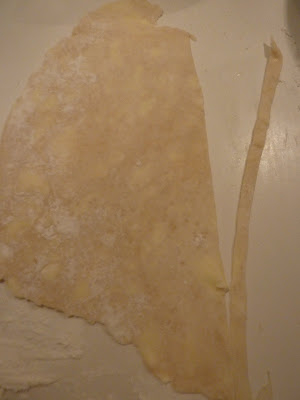 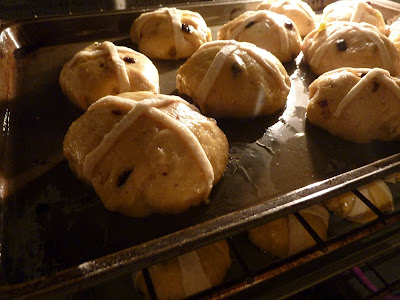 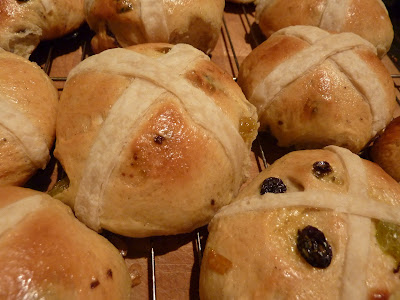 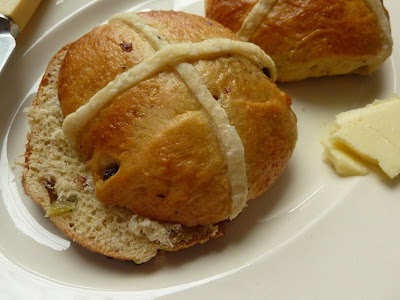 The first recorded use of 'hot cross bun' is from 1733 when spiced currant buns were eaten by early-medieval Saxons celebrating the German Goddess Eostre through a month-long feast that would become Easter.

I combined a recipe from Florence Fabricant at the NYT and a recipe from Gourmet to make a small batch on Saturday. The process is straightforward and each stage is rewarding, particularly the first rise after kneading - the dough comes up beautifully. If you melt the butter rather than cream it you'll get a lighter, open crumb that's more bready than biscuity.


In a small bowl stir together milk, yeast, and 1 teaspoon granulated sugar. Let mixture stand 5 minutes, or until foamy. Meanwhile melt the butter and pour into a large mixing bowl. Add the brown sugar and combine well. Add the egss and beat until smooth. Add the salt, spices, and citrus zest. Add the flour 1 cup at a time, alternating with the currants and raisins. You want the dough to be well combined before you begin to knead it.

Transfer dough to a floured surface and with floured hands knead until smooth and elastic, about 10 minutes. Place the dough in a large, clean, olive-oiled bowl and turn it to fully coat it with the oil. Cover with plastic wrap and let it rise in a warm place until doubled in bulk, about 1 1/2 hours.

On a floured surface with floured hands knead dough briefly and form into two 12-inch-long logs. Cut each log crosswise into 12 equal pieces. Form each piece into a ball and arrange about 1 1/2 inches apart on baking sheets. Let the buns rise, covered with damp tea towels, in a warm place until doubled in bulk, about 45 minutes.

Preheat oven to 400°F. Place racks in upper and lower thirds of the oven. While buns are rising, lightly beat the egg yolk with the icing sugar to make an egg glaze. On a lightly floured surface with a floured rolling pin roll out a small amount of pastry dough about 1/8 inch thick. Using a sharp knife, cut 1/8-inch wide strips for the crosses. Once the buns have fully risen, bruch them lightly with glaze, lay the strips on their tops and brush again.

Slide the pans into the oven and bake for 12 minutes total, switching pan positions at 6 minutes. Cool on a rack.

Posted by Candice Tarnowski at 07:08