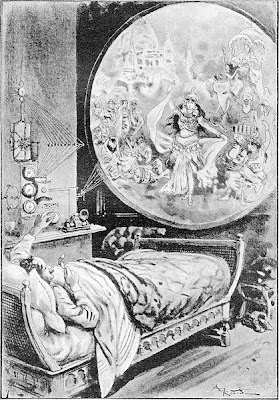 Flammarion was an astronomer and writer who maintained a private observatory at Juvisy-sur-Orge, France and in 1882 began publishing the magazine L'Astronomie. The idea of contact between a solid sky and the earth is one that repeatedly appears in his early works: a blue vault, solid crystal, plate glass. These limitations.

There are stars whose light shone some millions of years before we arrived … The luminous rays that we receive actually then departed from their bosom before the time of the appearance of man on the earth. The universe is so immense that it appears immutable, and that the duration of a planet such as that of the earth is only a chapter, less than that, a phrase, less still, only a word of the universe’s history.

Posted by Candice Tarnowski at 06:32